Listen – it’s way too soon to predict who will go to what team, at least with any degree of accuracy. I love the draft as much as the next guy, believe me; but it’s friggin’ January, for God’s sake. Doesn’t mean we can’t have a little fun.

1. Detroit Lions – With the first overall pick in the Pundit’s Mocking Draft, the Lions have selected: a single, guaranteed win. Congratulations to the Detroit Lions on their pick, who have already increased their win total from last year by 100%.

2. St. Louis Rams – With the second overall pick in the Mocking Draft, the Rams select: a year’s worth of crow, cooked using Kurt Warner’s special recipe.  I gotta think that’s some bitter crow – heavily seasoned with self-loathing, and accented with an almost minuscule touch of foresight, it’s served with a bottle of Marc Bulger’s poorly-aged whiskey. Bon appetit, St. Louis.

3. Kansas City Chiefs – With the third pick, the Chiefs select: A book-burning of Herm Edwards’ self-help novel, “Trust Me – You’re Almost There. Seriously. Ignore the Fact That You’re Not That Good At What You Do. You Can Do It. You Just Gotta Believe.” Edwards left his signature on every copy – in permanent friggin’ marker. I’ve heard it’s a frustrating read, so I don’t really blame the Chiefs for wanting to burn ’em up.

4. Seattle Seahawks – With the fourth pick, the Seahawks select: Zoloft for all of their fans. This isn’t a surprise. Their poor fans lost the Sonics, haven’t seen much from the Mariners as of late, endured a horrendous Washington U football season, and are likely facing a few years of rebuilding from the Seahawks. Michael Crabtree might have been a better solution down the road, but this fills an immediate need…

5. Cleveland Browns – With the fifth pick, the Browns select: LeBron James. Hey, Kobe’s been talking about doing it – why can’t LeBron? He’s the best thing going in Cleveland, so I really love this move by the Browns. At least until he bolts to the Knicks in two years.

6. Cincinnati Bengals – With the sixth pick, the Bengals select: Pacman Jones. I mean, he’s a perfect fit, isn’t he? He may even play both sides of the ball; the Bengals are known for their varying offenses, right?

7. Oakland Raiders – With the seventh pick, the Raiders select: the Grim Reaper. I think I’ll just leave it at that…

Rumor was the Redskins really wanted to trade up to select the Grim Reaper here, but Oakland was adamant about making this selection.

8. Jacksonville Jaguars – With the eighth pick, the Jaguars select: Amy Winehouse. I think they’re going to try her at wide receiver.

Hope she doesn't blow the routes...

9. Green Bay Packers – With the ninth pick, the Packers select: anybody on defense. At any position. This pick is also known as a reprieve for Aaron Rodgers.

I’m Samurai Mike, I stop ’em cold.
Part of the defense, big and bold,
I’ve been jammin’ for quite a while,
Doin’ what’s right and settin’ the style,
Give me a chance, I’ll rock you good,
Nobody messin’ in my neighborhood.
I didn’t come here lookin’ for trouble,
I just came to do The Super Bowl Shuffle

11. Buffalo Bills – At pick eleven, the Bills have selected: well, this is a bit odd. The Bills have selected a request to the NFL to shorten the regular season. Hmm, very interesting. They claim that the first six games of an NFL season are all that it takes to measure the talent level of a team, and the remaining ten games have become arbitrary. Wonder if this has anything to do with Buffalo’s 5-1 start, and subsequent 2-8 finish?

12. Denver Broncos – With the twelfth pick, the Broncos have selected: Ed Hochuli. Not sure what his role will be, though the Broncos brass is saying that he is the kind of guy that should get them over the hump against San Diego this year. 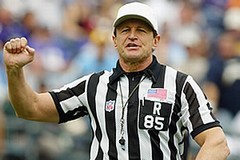 13. Washington Redskins – At pick thirteen, the Redskins have selected: George W. Bush. Daniel Snyder stays in Washington to select the sort of washed-up and over matched player he loves keeping around the DC area. His first choice was Obama, citing the need for change in the organization, but withdrew the offer when he learned that Obama’s first act of change would have been firing Snyder. Thus, Bush was the pick.

14. New Orleans Saints – At pick fourteen, the Saints have selected: Whatever defensive player the Packers didn’t take. I thought they might go with a bunch of passing records for Drew Brees here, but the Saints avoid the flashy pick and instead go with a need. Smart move by the Mardi Gras Maulers.

16. San Diego Chargers – With the sixteenth pick, the Chargers select: Bill Cowher. According to sources close to the Chargers, this pick was simple: the Chargers wanted a coach that could motivate the enormous amount of talent on the team to actually live up to their potential. For once. Might be the best pick yet, though that Raiders pick is hard to argue with, as well.

That’s it for Part One. Be sure to check back Friday afternoon for the duration of the Mocking Draft.