Why can’t us? E-A-G-L-E-S EAGLES WIN, BABY!!! The Pundit has some quick hits from the game

Ohhhhhhhhh, baby. The Eagles knocked off the Giants, 23-11, and are headed to the NFC Championship game to take on the Cardinals.

I’m still having a hard time believing we made the playoffs, and now we’re one win away from the Super Bowl. The SUPER BOWL! Damn I’m hyped.

– Eli Manning turned out to be the key in this game, and if you’re an Eagles fan, he didn’t disappoint. He threw two picks. He routinely had passes die in the wind, missing wide-open receivers. He just never seemed to be in sync, and it wasted a pretty solid effort from the Giants rushing game, which accumulated 138 yards.

– Oh man, David Akers totally struggles in the Meadowlands. How’s he going to kick in the nasty New York winds? Oh, he’ll finish 3-3 on field goal attempts? And John Carney will go 3-5, causing the Giants to be down two possessions late in the game, instead of one? Heh.

– Time of possession was nearly even, with the Giants having the slightest of advantages, 30:15 to 29:45. Key quarter was really the third, when the Eagles held the ball for ten minutes, and seemed to wrestle momentum for the game. Key play? Gotta be the third-and-twenty pass to Jason Avant deep in Eagles territory. Huuuuuuge play.

– Third-down possessions? The Eagles finished 7-14, and the Giants finished 3-13. Strange stat alert: in all three games, the loser finished 3-13 on third-downs. I thought that the Giants passing game, on third down, would be a huge factor for their offensive success. And seeing as they couldn’t muster a single touchdown, I guess I got that one right.

– Again, we really, really struggled to get anything going in the running game, and again, Andy Reid didn’t totally abandon it. The passing game clearly was more effective, but keeping the running game as an option kept the Giants honest. 40 passes and 28 rushes – I can live with that any day of the week.

– How good is the Eagles defense playing right now? Brandon Jacobs had a nice game, running for 92 yards on 19 carries. But every time the Eagles needed a big, short-yardage stop, especially late in the game, they seemed to get one. Sure, the Giants out gained us in yards, 307-276. But they didn’t get the big ones, and we did. Bend but don’t break, baby.  I am really proud of this defense right now; they’ve turned their game up to a level that we haven’t seen in this city for a long time.

– On a similar note, two players that may not get mentioned a lot, but who stepped up on those short-yardage situations: give it up for Broderick Bunkley and Mike Patterson, who clogged up the middle. Most of the talk will be about the monster games delivered by Dawkins, Mikell and Bradley, but the bigguns in the middle came up huge.

– Donovan McNabb played a solid game. He wasn’t great, as evidenced by his two picks and the intentional grounding safety. But you have to give some credit to the Giants pass rush, which kept pressure on him consistently for most of the game. He looked good moving out of the pocket and keeping plays alive. As well, he did a nice job spreading around the rock, hitting seven different receivers during the course of the game. Not sure what the whole picking up of the phone thing was about late in the game, but who cares. You get a pass for stupid attempts at humor that cost you a penalty if your efforts to that point already put the game away.

– The Giants took Brian Westbrook out of the game. And the rest of the offense stepped up. This ain’t no one-trick pony.

– Remember in the middle of the season, when all of the “experts” were saying that losing Plaxico Burress wouldn’t affect this offense? Yeah, scratch that, huh?

– Bring on the effing Cardinals. I’m ready myself. Let’s play them tomorrow. I don’t care, I’m so juiced after this win. Keep them playoff beards, people! (Editor’s note: And by people, he means men. Women, if you’ve got the playoff beard going…well, I appreciate the spirit, but you might want to reconsider how you express it. Right.) 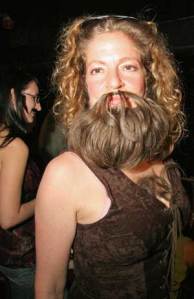 A diehard Eagles fan? Or a tragic case of gender confusion? You be the judge...

2 responses to “Why can’t us? E-A-G-L-E-S EAGLES WIN, BABY!!! The Pundit has some quick hits from the game”